Left: A thick cover of native plants, such as the potentilla and strawberries shown here, can help to choke out weeds. However, corn gluten looks like a promising way to prevent weed seeds from germinating in early spring, when coverage may not be so lush.


A MENTION IN AN ARTICLE I READ RECENTLY sent me in search of information about corn gluten meal as a possible addition to the wild gardener's toolkit. What I learned makes me think that CGM could be just what I need for control of weeds in the area I'm trying to turn into a native garden.

CGM is a yellowish, powdery byproduct of corn milling (it is not the same as cornmeal used in baking, which is made from ground-up whole corn). It is often incorporated in animal foods, including dog food, because of its high protein content. In the late 1980s, researchers at Iowa State University accidentally found that it has the ability to stop a germinating seed from forming normal roots. As a result, the germinating seed becomes susceptible to dehydration, and will probably die.

Is it safe? Some people are allergic to corn and corn by-products; these people should avoid exposure to CGM. Other than that, however, CGM apparently is quite safe. The U.S. Environmental Protection Agency has classified it as "minimum risk," and it's recommended by a number of websites devoted to environmentally safe gardening practices. (The Northwest Coalition for Alternatives to Pesticides has a good fact sheet on the topic.)

I've probably been feeding CGM to wildlife for at least a month without knowing it, since it's very likely present in the stuff I feed my ducks. The duck food has been attracting squirrels, chipmunks, blue jays, and grackles, all of whom have been giving "Ducky's Diner" enthusiastic reviews. The ducks, who prefer their commercial duck food to most other foods I've offered them, seem to be thriving.

CGM attracted my attention because I've been fighting weeds in the area I plan to turn into a native garden. Right now I'm relying on aggressive native groundcovers for weed control while I wait for trees and shrubs I've planted to start creating shade. The groundcovers are providing good coverage now (see the photo above); however, they will die back over winter and provide poor coverage in early spring.

Early spring is, of course, precisely when many weed seeds are germinating. In fact, one of the (many) ways weedy plants often out-compete native rivals is that they germinate earlier, thus gaining a head start over the slug-a-bed natives. This year, in order to knock the weeds back long enough for the natives to take hold, I had to do a lot of hand weeding. An application of CGM at the right time might have saved me a lot of work!

CGM does have its limitations:

Still, I think CGM is worth a try. This is what I plan to do:

Haven't tried CGM yet myself, Flora, although now that I've spread the load of soil I just might. The mayor of Wolfville is an avid organic gardener and he used the meal on his lawn, and says it did very, very well--he was immensely pleased. You might want to watch Duck and Cover, Run and Hide around it, though. :-)

If DCR&H eat any more than they do now they're likely to burst! I'll be scraping foie gras of the walls of their duck house.
F

Welcome to the Wild Gardening blog 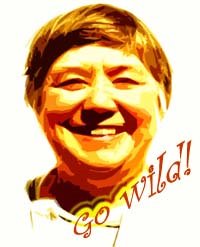 My goal is to help you create and enjoy a garden that will be good for you, good for the planet, and good for all the critters, human and otherwise, that visit it.

About this blog and its owner

I’ve lived and gardened in Chicago and the Seattle area, and now I live on 250 acres in eastern Canada. Most of my life has been spent as a journalist and editor, but after moving to Seattle I took a detour and ended up designing and installing wildlife-friendly gardens. For a long (sorry) but (I think) funny essay about this experience, please click here.

In this blog, I try to combine my gardening experiences with journalism-type research to come up with items that I hope will be useful to you, the gardener who wants to be kind to wildlife. The blog will probably be most useful to people living in areas where I have some practical experience, namely the band of states and provinces that are on either side of the United States-Canada border.

If you like what you find here, please consider joining the site as a member or adding it to your “follow” list. The modules for this are below.

Question: I have a neat old elm tree in the front yard which is sorely afflicted with mistletoe. I don't know quite what to do with it, as every windstorm drops branches, bark and other parts down on the yard below. I know the infected wood will have to go, at least that is what I'm told, but a considerable amount of tree must be removed in the process. It is a dear tree, and I don't want it to come to fatal harm. What should I do? From Mary

Answer: Dear Mary, old is not ugly, dying is not bad, and dead is part of the natural order. At least if you're a tree.

Old, diseased trees, and the dead trees they eventually turn into, play just as important a role in an ecosystem as the young, healthy ones do--even more important because, thanks to the misguided practices of the past, dead and dying trees have become so rare. Holes in dead and dying trees are vital nesting spots for many birds and small mammals. Dead branches and other litter (which is not necessarily a sign of disease--healthy trees drop litter too), if left to decompose naturally, are also important for ecosystem health.

When working with old trees it's important to get advice from an arborist who understands their value and won't be in too much of a hurry to make drastic changes. Before hiring an arborist, I'd ask him or her to explain the ecological value of dead and dying trees. Ideally I'd want to work with an arborist who could show me examples of dead or dying trees he/she has left standing (aka snags).

I don't know much about mistletoe because I've never lived anywhere that it grows, but I wasn't surprised to read in the Wikipedia that it is an ecologically important species. All too often, valuable native species are classified as pests just because they don't fit preconceived notions of attractiveness. To me it sounds like a pretty cool plant and one I would be happy to have in my garden.

All in all, as long as the tree doesn't pose a hazard to people or property (the advice of a professional could be helpful in making this decision), I would leave it alone to live out its life in dignity and peace. If the tree does pose a hazard, I would look for an arborist who is willing to do the least amount of work necessary to remove the hazard, making every effort to leave as much of the tree as possible and not destroy its appearance.

With any luck you will find someone who appreciates the aesthetics of old trees--who recognizes the beauty, as well as the ecological importance, of big holes, broken limbs, and gnarly wood. (With any luck, we will all find people like this as we get older--but that's another story!)

I like to answer questions! Send me a question at wildflora at gmail dot com and I'll try to answer it. If you provide an email address, I usually respond privately within a few days. (If I forget, please forgive me and send me a reminder.)

I believe that what homeowners do with their property is important, both for the health of the neighborhood and for the future of the planet. But I also believe that human beings in general, and gardeners in particular, really need to stop worrying so much. For a long but funny article I wrote on this theme, click here.

FOR INFORMATION ON PREVENTING WINDOW STRIKES

For tips and products to help prevent birds from flying into windows, go here.

FOR INFORMATION ON HUMMINGBIRDS

For my recommendation for best hummingbird feeders and other information about feeding hummingbirds, start here.